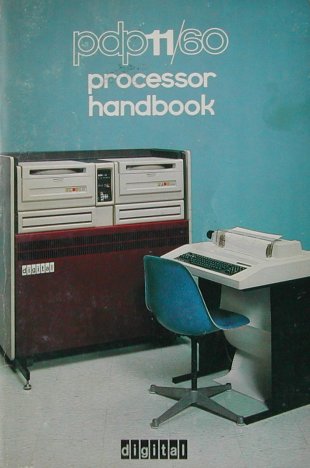 A year ago I found a in the corporate cabinet, but I did not have the means to transport it to my house. The only thing that I took was the console, to prevent cosmetic damage to it. I decided that I would take the system during the visit the next time (May, 2005).

However, due to available room restrictions, I was sure that I could never put the complete corporate cabinet, as shown on the cover of the processor handbook, at my place. So I decided to go for the CPU box and its power supply, the wiring harnesses, the power controller and all loose bits in the cabinet. I already had the console and the console static protection/connection board, and planned to build the in a tall H960 cabinet.

DIGITAL introduced the PDP-11/60 in March 1977.
The PDP-11/60 has some attributes that makes the machine interesting. The 11/60 has an option called WCS (Writable Control Store) that allows a user to write his own micro-code and let the processor execute the new instruction(s) at full speed! There are 3 different WCS options:

The only other PDP-11 that has a WCS option (KUV11, M8018) is the , KD11-F processor.
Ritchie Lary wrote the micro-code for the to emulate the PDP-8 instruction set, making it the "fastest PDP-8 ever".
It is a pity that the source code seems to be lost. Even Ritchie Lary, the author, no longer had the source when Eric Smith inquired some years back (~2011 - 2012), and Ritchie did not think that anyone else was likely to have it. So, it appears to be lost forever.
Update from Paul Koning (Feb. 2018)
A few more snippets of information: it was used by the WPS-8 development group in Merrimack, NH (a few cubes over from my first office at DEC). The host ran RSTS/E, and there was a RSTS "Runtime System" as part of the machinery.
I've never seen any of the code; the brief description above is all I know.

Jumps within this page are the following.

The PDP-11/60 is a somewhat rare machine, as it was not one of the more popular models. Arguably, the processor should have been designed with the style 22-bit memory management, not the style (18-bit).
Perhaps the non-popularity of the caused the machine to have a short life span during which it was shipped (only from 1977 to 1981 or so).
However, the Floating Point (option FP11-E) is pretty good, and of course the was user micro-programmable. The system was available in 4 different configurations. Three configurations were housed in a Low Boy Corporate cabinet.
The main difference between these three was the installed mass storage option in the top left and right side. The choice available was either two RK06 removable pack disk drives, or a combination of a RK05f fixed and RK05j removable pack disk drive, or no mass storage peripherals at all, just two blank panels. The fourth configuration is housed in a High Boy Corporate cabinet and does not have any peripherals in the cabinet.
Here you see my Low Boy cabinet system in its original state. The expansion card cage is already outside the cabinet.
The two upper bays contained a PC05 paper tape reader/punch at the left side and an RX01 floppy drive unit at the right side.

The 11/60 console (KY11-P) resembles the PDP-11/34A "full" console: it has the calculator-style keypad and the six 7-segment red LED displays. A key switch is used to turn on/off and control the system.

The following table gives an overview of the buttons of the keypad. The CNTRL (Control) button is used in conjunction with other buttons to prevent accidental operation of certain functions. When used, the CNTRL button must be depressed first and held down while the other button is pressed, just as the operator keypad of the PDP-11/34A.
Those buttons that are interlocked with the CNTRL button are indicated with an asterisk (*) in the table below.

THIS   11/60  SYSTEM   CONFIGURATION
In the picture you can clearly see the two UNIBUS-out BC11 cables.
One for the connection to the DD11-KF MOS memory backplane, and the other to the DD11-CK I/O peripherals backplane.
In the bottom, below the card cage itself, is a big axial fan that blows cooling air up through the card cage to the rear side.