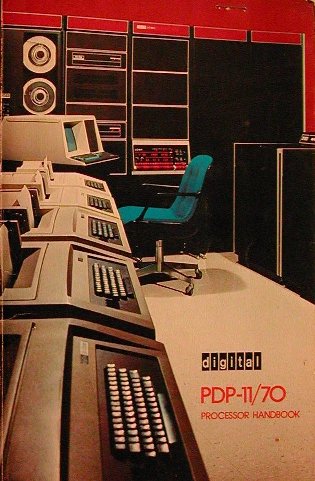 This is my PDP-11/70 system. It is not the most expanded system that I have at home (that is my PDP-11/35).
The PDP-11/70 is the biggest UNIBUS based machine that D|I|G|I|T|A|L built.
D|I|G|I|T|A|L introduced the PDP-11/70 in February 1975.
The PDP-11/70 is the high-end of the PDP-11 architecture that supports the speed, addressing range and bandwidth required in large systems applications. The PDP-11/70 was the first PDP-11 that uses cache memory.
In a normal configuration, the PDP-11/70 processor is housed in one tall H960 industrial 19" cabinet. A second cabinet next to the processor contains the system memory, either magnetic core, MOS memory or a combination of both. The memory is housed in an expansion box, and one cabinet provides room for 4 expansion boxes. All peripheral devices were installed in additional cabinets.
Due to lack of space (a common problem among collectors), I installed the one memory expansion box above the processor in the same cabinet. Sufficient room is between the processor and the memory box for the cooling. I do not run this system for long times (say, several hours), so the temperature in the cabinet stays ok. As well as the energy bill, because this system is quite power hungry!
At this moment I have only the following peripherals connected to the PDP/11-70 system.

I plan to add one more cabinet for additional peripherals, like an RL02 drive.

The PDP-11/70 has two separate busses, one for the system memory and one for the peripheral I/O devices. The peripherals all communicate via MASSBUS controllers with the central processor. The backplane of the 11/70 offers the possibility to install 4 MASSBUS controllers. Each controller can connect several devices like tape and disk drives.
At the far end of the 11/70 backplane are a few UNIBUS slots available. These can be used to interface to the system console, a printer, and all other Small Peripheral Controller devices like the interface for RX or RL drives, SDI drives, a network interface, etc. However, the I/O bandwidth of these devices is limited by the UNIBUS. The MASSBUS offers a better I/O performance.

Jumps within this page are:

The front panel of the PDP-11/70 has a few more buttons, switches and lights than the average Personal Computer, as you can see.
I guess this is what makes these old systems 'beautiful', compared with a modern PC. The full console of the PDP-11/70 is the most elaborate one compared with all the "blinkenlight" consoles found on other PDP-11 processors. 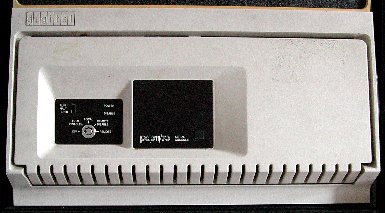 The PDP-11/70 is also available with a so-called remote console. This remote console is less "flashy" - it has only a system power key switch, a remote push button and just a few indicator lights.
You install an M8255-01 (KY11-RE) Serial Console Control Module in slot 40 to which you can connect modems (or terminals ?) that offer the same functionality as the full console.
The PDP-11/70 system does not need to be nearby to control it, so this is an ideal option for remote service of the machine. As I have this version of the PDP-11/70 as well, I hope to figure out how to operate such a remote controlled 11/70 in the future. Yup, I have two 11/70 systems in my collection! However, these two consoles are not the only consoles for the PDP-11/70 machine.
Here you see the console of the so-called "Industrial 11/70".
The "Industrial 11" was developed for use in processing and manufacturing applications.


This is the console of an other machine, called the Data System 570.
Again the machine is the PDP-11/70, but the white-greyish console gives the machine a 'clean' appearance.
The System 570 was developed for medical environments.

Control over the system via the (full) console

Control over the system via the remote console

Thanks to Edward, I have the information from the little booklet "Electronic Console Commands", EK-E1170-MC-001.
The push button in the right lower corner is a "LAMP TEST".
The console has 3 separate states: Program I/O,  Console, and  Talk. 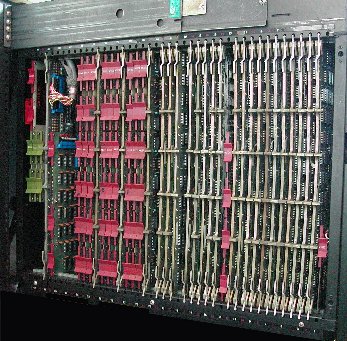 As usual, slot #1 is at the front side when you stand in front of the computer.
So, from front to rear you see the following main sections on the PDP-11/70 backplane.

Note that from front to rear of the machine there are just 2 large backplanes.
They cannot "easily" be separated, because many wires are wire-wrapped between the 2 backplanes.